Beehive Industries taps print to help those in need 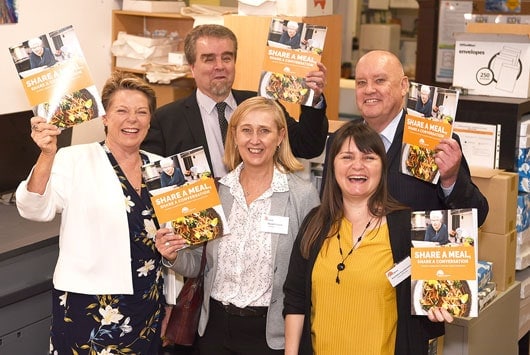 Beehive Industries, a Sydney-based social enterprise which operates a commercial printing, fulfilment and mail-house business to fund
the support of over 200 socially isolated senior citizens has been boosted by the installation of a Konica Minolta AccurioPress C3080.

The new press has already been put to good use producing a new cookbook ‘Share a Meal, Share a Conversation’ that not only provides easy
recipes, but also gives readers step-by-step instructions on how to connect with video calls to stay connected during COVID-19.

The enterprise has operated in Darlinghurst for nearly 50 years and now with its beefed up print capabilities is open to working with printers
that may be interested in partnering with the not-for-profit, which is also registered with the NDIS.

Beehive Industries CEO Brendan Lonergan says around 225 people – many with disabilities including mental illness – are supported by the operation with many helping pack jobs and fulfil mail-order campaigns.

In return they benefit from social interaction, regular meals, day trips on Sydney Harbour, playing Bingo and doing craft activities
with each other.

“We only get funded for about 14 per cent of the folks we look after so we need to find 86 percent of the funding through our commercial
business which does packaging, commercial printing and mail house services,” Lonergan told ProPrint.

Beehive already supplies print and mailorder for large organisations including Telstra, the NRMA, Racing NSW, Legacy and NSW government departments including the Department of Primary Industries and Environment.

But it has been slammed by COVID with the facility having to close its doors for 11 weeks while also losing $200,000 in government funding.

Now, Lonergan is looking to gain some extra work to keep his team busy and engaged.

Yohei Konaka has now taken over the reins as managing director at Konica Minolta Australia after COVID-19 forced a delay to the start of his
official appointment.

Yohei was due to start in April but pandemicrelated travel restrictions meant he was unable to fly out from Japan.

For the last six months, Yohei has been working remotely with Dr Cooke and the executive team at Konica Minolta Australia.

He has used this time to gain a more complete understanding of the Australian market. Konica Minolta said this experience has
given Yohei a “valuable head start as he sets “The print work we do also includes assembling material and mailing it out for customers,” Lonergan said.

“We like to keep the people we support actively engaged as the bulk of them are seniors living alone in housing commission, boarding
houses and homeless shelters.”

This can be attractive for printers that want to offer a full-service solution, but lack the physical space or staff to ensure the job can be done.

Lonergan said investing in the new Accurio has moved the business into a new league.

“Having the AccurioPress C3080 has gotten us into a new class of work because the print quality is fantastic,” he said.

It was this investment that meant it could produce the new cook book with Sydney’s Twin Loop Binding assisting with the binding.

The book was recently launched with the team from Konica Minolta, including outgoing managing director Dr David Cooke and production
and industrial print general manager Sue Threlfo, in attendance.

“We are proud to be associated with their commercial printing program which offers both an excellent printing, assembly and fulfilment
process, and also an opportunity for their members to learn the skill of digital printing,” Threlfo told ProPrint.

“The Share a Meal, Share a Conversation book is a great example of an excellent digital print job, and also a great story about bringing people
together.”

Lonergan says partnering with Beehive Industries gives printers increased opportunity to secure government contracts as many tenders now require suppliers to prove how they are generating a positive social impact with the work they do. 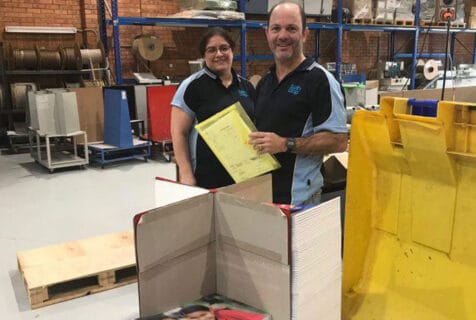 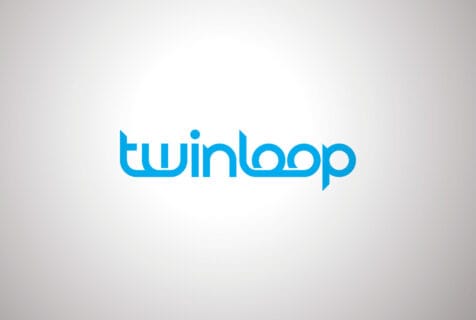 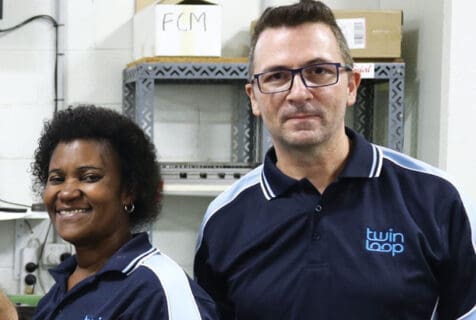 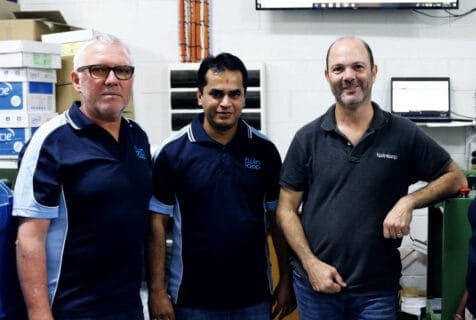 Twin Loop Binding is moving towards being a full finishing house

What our clients say

'Twin Loop Binding are a reliable and reactive business partner, that work with us to ensure our client’s needs and deadlines are met. Twin Loop not only fulfil most of our book binding requirements, but also provide us with consumables such as binding wire, coil and plastic and also laminating and cello films so we can do our own book binding as well as servicing our machines.'

Print Media Group
'It is not often you come across a supplier that you can just send the work to and you know the job will be completed when you require it, every single time. Even in peak times like December, those almost impossibly short timeframes are completed without fuss.'

Springwood Printing (Blue Mountains)
'Worldwide Bondi have been working with Wayne and his team for the last 10 years. Twin Loop is our first and only stop for all our binding requirements. The Twin loop team are helpful, reliable and professional - and the end product always looks great! Can’t recommend Twin loop highly enough.'

Worldwide ...more than just print
'We trust Twin Loop with all our Perfect Binding work and wire binding and have 100 percent confidence that they will take care of the job and provide a quality and affordable end product. We have no problem recommending them to our colleagues.'

DPR Print Production
'We at Sydney DPS have been dealing with Twin Loop Binding for more than eight years and have always found them to be professional and easy to deal with. We trust them with all our perfect binding work and wire binding and have 100% confidence that they will take care of the job and provide a quality and affordable end product. We have no problem in recommending them to our colleagues.'

DPS
'Snap Kirrawee have been using Twin Loop Binding for over 6 years now. The service and quality at Twin loop is exceptional and they are always willing to go the extra mile for us to finish the job on time. We have no hesitation in recommending Twin Loop Binding to any business who needs excellent quality binding solutions.'

Adrian Hoyle, Director - Snap Kirrawee
'UTS Printing Services have been a customer of Twin Loop Binding for more than 10 years. The service that we have received has been outstanding. We have always found them, professional, responsive, and respectful of privacy. They are easy to do business and the quality of their work and attention to meeting deadlines is excellent. We have always found it very convenient to have a trade binder that both meets our binding requirements, as well as being a supplier of binding consumables.'

UTS Printing Services
'Twin Loop Binding is a professional and efficient organisation dedicated to delivering high quality print finishing with amazing service. Twin Loop provides us the ability to manage our capacity by delivering jobs on time and at competitive prices. This enables us to focus on delivering the very best print products to our customers.'

From time to time we’ll send you special offers, industry tips and tricks, and a selection of our best work
SIGNUP

Please fill in the below details if you would like a quote on sending out work to be finished by Twin Loop. We will be back to you within 1 business day.

From time to time we’ll send you special offers, industry tips and tricks, and a selection of our best work